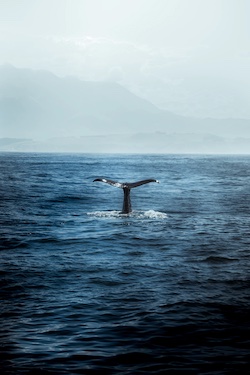 Blue whales can grow to a gigantic length of 24 to 30 meters (80 to 100 feet). The longest blue whale ever recorded was at an astounding 108 feet (33 meters) length. They are the largest animals to roam the surface of the earth at par with dinosaurs.

Blue whales live a very long life under favorable conditions. The longest living blue while was discovered living his best life at 100 years old. Scientist’s calculi the ballpark age by counting the wax layers in the ears of the whales. However, the average age for blue whales is roughly 80-90 years.

Human History of their species:

Blue whales were ruthlessly killed during the first half of the 20th century. The whales provided a treasure trove of oil and their body parts were highly priced for culinary and medicinal practices. During the 1930’s it is reported that more than 29,000 whales were killed in a single season. When their numbers drastically reduced to the brink of extinction they finally received worldwide protection in 1967.

The whales are still listed as endangered species in the International Union for Conservation of Nature lists. There are only 10,000- 25,000 individuals left worldwide and their recovery is still slow. The main causes are impact o climate change, ship strikes and illegal poaching.

Blue whales are extremely loud creatures. They are in fact the loudest animals on earth with voices reaching up to 188 decibels. That about 40-50 decibels more than a jet engine. They produce a hauntingly beautiful song conjugated with moans, groans and pulses. The sound can be heard up to 1600 kilometers or 1000 miles away.

Blue whales need to feast on large quantity of krill for sustenance. They can hold up to 1000kg or 22000 pounds of tiny crustaceans at time. Their per day meal consists of 4000 kg or 9000 pounds of krill per day. They feast on about 40 million krill during the feeding season of summer.

Blue whales have small esophagus so they cannot swallow large sources of food. It’s so small that they can’t even swallow a human being. They don’t have the capacity to break down or chew large pieces of food into smaller size.

Blue whales are pretty fast as they migrate long distances when the seasons change. They can cruise in a relaxed way at a speed of 5 mph or 8 kph. When the need arises they can accelerate up to 20 mph or 32 kph. They mostly spend their summers in the Polar Regions and make a long trip towards the equator during the winter season.

Blue whales calves are the largest babies weighing at 4000 kgs or 8800 pounds at birth. They rapidly gain around 90 kg or 200 pounds per day. they have the fastest growth among in the animal kingdom.