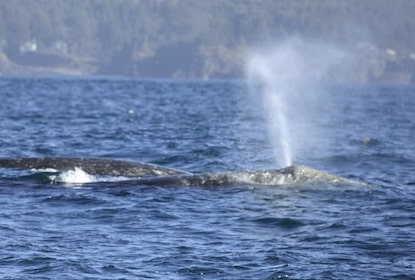 Gray whales were once common in the Northern Hemisphere, but now they can only be found throughout the North Pacific Ocean, where two populations exist, one in the eastern and one in the western North Pacific. Because of their hostile responses when harpooned, gray whales have gained the moniker "devil fish." Both Pacific cultures were almost wiped out by commercial whaling. In the 1930s and 1940s, international conservation initiatives were introduced to protect whales from over-exploitation, and in the mid-1980s, the International Whaling Commission implemented a commercial whaling moratorium. Gray whales are known for their curiosity toward boats in some locations and are the focus of whale watching and ecotourism along the west coast of North America. Gray whales make one of the longest annual migrations of any mammal, traveling about 10,000 miles round-trip and in some cases upwards of 14,000 miles. On their migration routes they face threats from vessel strikes, entanglement in fishing gear, and other sources of disturbance.