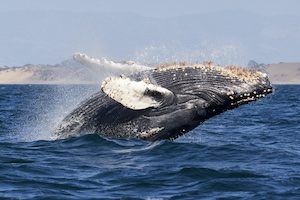 The humpback whales have a mainly grey and black color body. However, there is difference among the patterns on the underside of the tails, bellies and pectoral fins. The long tails (up to 18 feet wide) have sharp tip and re serrated along the edge. These patterns are used to identify and monitor the whales by the scientists. They are as unique as human fingerprints.

They love to travel:

The humpback whales can travel 8000 kilometers in ocean every year. They have the longest migration in the world from better productive feeding grounds in winter to breeding grounds in warm tropical oceans. The humpbacks can go for months without food and only surviving on stored fat reserves.

The humpback whales of the Arabian Sea are the most isolated groups of whales on earth. They haven’t interacted with other populations in over 70,000 years. They do not migrate and live comfortably in the waters around Pakistan, India, Iran, Yemen, Oman and Sri Lanka.

They are singers at heart:

The famous humpback while songs can be heard typically during the winter mating season. Sometimes they also sing during the summer months and performed for 10- 20 minutes. This is repeated for hours at an end. These songs are composed of complex calls. Many males sing this in the same area spanning up to 3000 miles of ocean. Some individual’s re- invents themselves by switching to new songs every season and some like to continue their old- school vibe.

Their songs are a mystery though:

The marine biologists are still unsure of the true purpose of their songs. Some hypnotized it’s a song for mate selection, while others think it’s to establish dominance and identity. While many believe it’s a mixture of everything. However, we think they are just having fun, which doesn’t need entertainment anyways!

They need our help to survive:

The primary reason for their rising death rates is humans. Many whales die each year due to boat strikes, fishing gear, pollution, illegal hunting and vessel- based harassment. Some recreation boats can cause behavioral changes or stress in the animals. Before the banishment of commercial whaling, their population had been pushed to the edge of complete extinction during the last half of 20th century.